So here is a smoothie recipe that I absolutely LOVE, and would never have if it weren't for working at The Better Health Store Market in Lansing, Michigan.  I worked there as a manager and the in-store cafe made awesome sandwiches, juices, and smoothies.  This was by far my most favorite smoothie, which was called the "Elvis" due to the peanut butter/banana combo.  I have since altered it a little bit, but this recipe definitely owes credit to the store and the employees who work there (who work hard for shitty pay, believe me).

An essential part of this recipe is the frozen bananas, because you won't get the same texture in the smoothie if you use fresh ones.  Frozen bananas are an essential for any raw food ice cream dish and are awesome for other baking recipes as well .  All you need to do is pick up some brown or "baking" bananas at your local market (usually quite a bit cheaper), slice and freeze.  They might turn a bit brown in the freezer but that's fine.  I use a similar combination of carob, banana, and peanut butter in some of my raw ice cream recipes, but those are to come at a later date =) 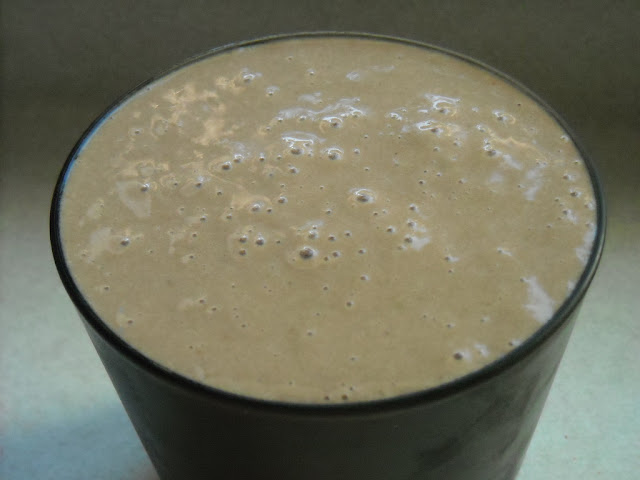 1 1/2 frozen bananas
2 tbs peanut butter
1 tbs carob powder (or more if you like it really caroby)
1/2 cup plain yogurt (or vanilla if that's your thing)
1 tbs honey
Soymilk (fill to cover ingredients, or depending on how thick you like it)

Also, in my opinion, you should always try to buy ORGANIC soymilk.  This is because soybeans are some of the most heavily-sprayed crops in North America, and more so than not, they'll be a GMO crop.  Also why you should always get organic tofu as well.  It's also good to note that soy as naturally occurring estrogen (as soy isoflavones), so you really shouldn't be eating more than 25g of soy protein a day.

So because of all this, you might ask why not just use Almond milk?  Because the texture of smoothies and baked goods just doesn't compare, that's why.  Almond  milk is great, but I find the smoothies are always more watery than with soymilk.  It's great for oatmeal or porridge, but I'm going to have to stick with soymilk for smoothies (also good for protein).

kinners87
I've been a vegetarian for 9 years and a Pescatarian for the last 3. Aside from fish I eat mostly vegan food, but my focus is to eat healthy by getting a well-rounded diet and incorporating only fresh, simple flavors: nothing pre-packaged, pre-made, highly processed. I'm a firm believer in food as an expression of the self and every recipe should be made with lots of love =)